For nearly ten seasons, Cantata Profana’s “impressive Artistic Director” (New York Times) Jacob Ashworth has honed a visionary approach to programming music from the past 1000 years into genre-bending theatrical chamber shows, winning the CMA/ASCAP Award for Adventurous Programming in 2016. In this lecture, Jacob highlights a few notable programmers of the past, catalogues the prevailing styles of today, and breaks down the elements of his own approach, from inspiration to research to performance, walking us through the creation of three of Cantata Profana’s signature main stage shows.

A fearless ensemble of inquisitive musicians, Cantata Profana boldly juxtaposes masterpieces from the medieval era to the 21st century in lovingly curated shows filled with unexpected works and daring theater. At the heart of each signature Cantata Profana production is a vision for a new kind of programming: breathing life into classical music by carefully weaving together rarely-heard works from every chapter of music history and reveling in how it all fits together.  In the constant hustle and hand-wringing over how classical music can keep its audience alert and engaged, programming is the most underutilized tool in the shed. Combining disparate works from across centuries and continents and marshaling them into shows that transfix audiences, from the geekiest of music aficionados to first-time concert-goers, is an art that takes care, intention, and bravery. It can educate without words, it can radiate its own truth, and it can give indescribable delight. When it is done right, the result is irresistible: music that speaks for itself. Jacob is also Co-Music Director of the “categorically imaginative and radical” (New Yorker) Heartbeat Opera, which is fast becoming one of the most influential companies making opera today. As a soloist, Jacob appears in recitals and chamber music performances throughout the US. Jacob earned his masters and doctorate from the Yale School of Music under renowned violinist Ani Kavafian and studied baroque violin with Robert Mealy as a member of the Yale Baroque Ensemble. Previous degrees include a Performer Diploma from Indiana University and a Bachelor’s from Manhattan School of Music. 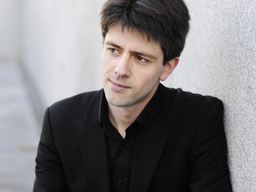