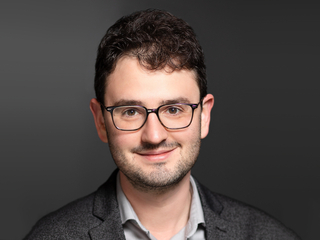 Pianist-composer and UMBC Professor of Music Daniel Pesca discusses the process of bringing new music to life, from the composer’s desk to the concert hall stage. He also explores the inspirations that spark his creativity, and the ways he transforms those concepts through his writing process. The talk centers around several works that he will present in recital at UMBC on Friday, September 25th.

Daniel Pesca is both a pianist and composer and has played the world premieres of over 100 works, many written for him. In the process, he has shared the stage with many renowned ensembles, and has appeared at the Library of Congress, the Kennedy Center, NYC’s Miller Theatre, Carnegie Hall, June in Buffalo, and international contemporary music festivals. He has performed as concerto soloist with the Eastman Wind Ensemble, Oberlin Sinfonietta, Aspen New Music Ensemble, and Slee Sinfonietta. His work is featured on recordings from Urtext Classics, Centaur, New Focus, CCCC, Nimbus, and Oberlin Records.

Professor Pesca is founding co-director, pianist, and composer for the Zohn Collective, a flexible new music ensemble. Since its inception in 2017, the ensemble has made several recordings and has appeared in concert at Oberlin, Notre Dame, the Cleveland Museum of Art, and the University of Kentucky. Projects at Vanderbilt and the Beijing Modern Music Festival are scheduled for 2021. Daniel is also the founding pianist of the Grossman Ensemble, the resident new music ensemble at the University of Chicago. Since its formation in 2018, the ensemble has commissioned and premiered 20 new works, five of which appear on an album released in August 2020.

Previous to his appointment at UMBC, Professor Pesca was artist-in-residence at the University of Chicago, and held teaching positions at Ithaca College, Syracuse University, and Northeastern Illinois University. He received his Doctorate of Music Arts from the Eastman School of Music in Rochester, New York.